How to prepare for success

It is no trend. Not an amateur sport. Not a sport for families and friends. Women’s football is a reality within an expanding market with unstoppable numbers. For very good or very bad, the accelerated growth of this discipline will be one of the great changes that clubs will need to know how to adapt.

The annual report presented by UEFA,Women’s football across the national associations 2016/17, reflects a rapid evolution of women’s football in Europe following the success of major events such as 2015 Women’s World Cup held in Canada and 2016 Rio Olympic Games. On the other hand, the UEFA Women’s EURO that will start next July in The Netherlands will count with a total of 16 national teams for the first time in its history.

Regarding numbers, the European report presents statistics as relevant as significant in the period from 2012-13 to 2016-17: 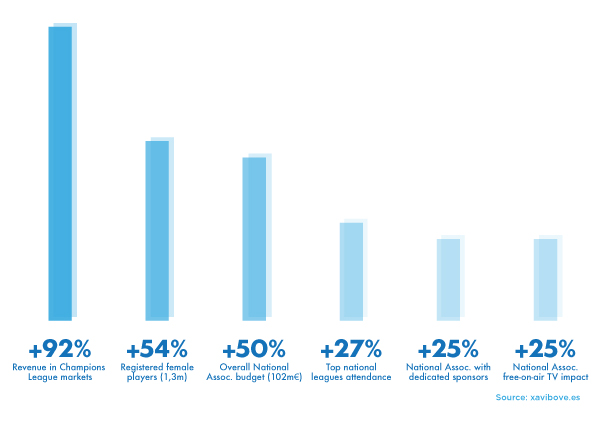 As a club, what can I do to not miss the opportunity of a constant-growing market? Firstly, identifying and analysing the changes that women’s football evolution will lead both in European and regional levels. One of them, an increase in sponsorship, TV audience and digital engagement competitiveness, specially the latest which has grown strongly in in the platforms as Youtube and Twitter in the last 4 years. Secondly, investing the necessary time and effort in areas such as:

As important as managing day-to-day tasks will be setting the course for a future of great results. Are you ready?